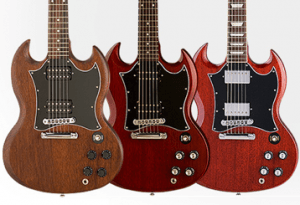 “It’s light, it has incredible tone, it’s cool and it has a good price” – Someone once said about one of the most under-rated guitar design ever, the SG or less commonly known as what it stands for “Solid Guitar”.

I know the Les Paul or LP is the famous cousin. But an SG is truly the greatest “double humbucker” rock guitar I have ever used. And I have played many, ie. Es-335s, Ibanez RGs, PRS, you name it.

I’m not the only one. There are many others out there who raves about SG as their O’thing. Read Ty talk about this first life partner.

I remember the first time I played one, being a jazz-rock-blues (yes in that order) based player, the first riffs I played on it was a  jazz riff. I was utterly surprised by how well it handles the genre clean. It is smooth, resonant and plays easily. It reaches the highest register of the guitar easily, unlike an LP which is blocked by the bulky joint.

The sparkly clarity is present even when played with distortion. The notes ring so well and has a balanced note separation. Started loving guitars with the Strats then became a Tele afficionado and later on in life as in now, I’m an SG convert.

I term the SG as the greatest simple rock guitar of all time.

Here in myO’things, we have 2 Epiphone SG in stock. A standard one with glossy red and a Worn series with its beautiful red wood grain both carefully selected to be passed on as your O’thing.

Check out our Carousell page or watch this space for pictures and details of these two beauties.

This site uses Akismet to reduce spam. Learn how your comment data is processed. 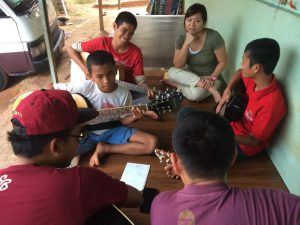 MyO’things is a social business to empower kids in orphanages all over the world. We fund work done by non-profit SongKids to make space for kids to find their song. Check out Songkids.org